Rædwald was King of East Anglia from ca. 599 to ca. 624. A member of the Wuffingas dynasty, he was the son of Tytila, son of Uffa, son of Wehha, first king of the East Angles. Like most of the East Anglian records, details of Rædwald’s reign were likely destroyed during 9th century Viking invasions and monastery burnings. He is however mentioned in the writings of Bede, who mentioned him by the title Bretwalda, i.e., Britain ruler.

Rædwald was the first king of the East Angles to become Christian, being converted in the court of King Æthelberht sometime before 605. Despite maintaining pagan temples and having a pagan queen, he is credited for the survival of Christianity during a time when the faith was being challenged in other Anglo-Saxon kingdoms. 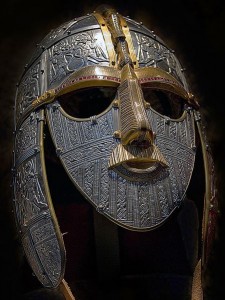 This king may have suffered from the same obscurity as many other Anglo-Saxon kings if not for the discovery of the Sutton Hoo ship-burial in 1939. The identity of the person interred there is not known conclusively, but is believed by many to be King Rædwald. The semi-pagan burial mound is near Rendlesham, believed to be the location of the Wuffingas’ royal hall.