Ecgberht was King of Wessex from 769/771 to 839. He was possibly the son of Ealhmund, King of Kent who ruled under Mercian overlordship. Ecgberht’s genealogy is contested by experts. The Parker Chronicle (i.e., earliest Anglo-Saxon Chronicle) traces Ecgberht’s son’s ancestry back through unknown persons to Ingild, brother of Cedric, patriarch of the House of Wessex. Later historians have posited that he was Kentish, and that his Wessexian roots were fabricated to grant him legitimacy. 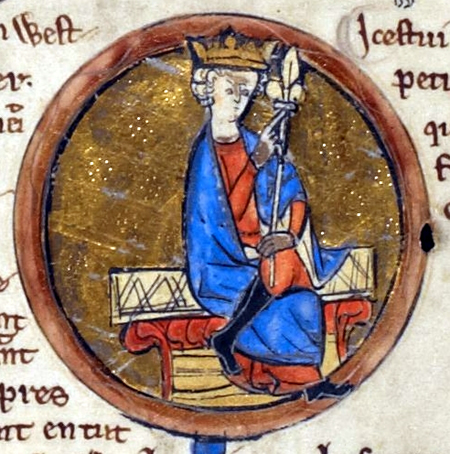 Ecgberht, from the Genealogical Chronicle of the English Kings

In 786, King Cynewulf was murdered by the brother of the king Cynewulf had deposed (i.e.,  Sigberht). It appears that King Offa of Mercia  intervened and placed Beorhtric on the throne following his marriage to Offa’s daughter. Ecgberht was exiled ca. 789 to Francia, then ruled by Charlemagne, for three to 13 years.

At home, Beorhtric remained subregulus to the King of Mercia through the reigns of Offa, Offa’s son Ecgfrith, and their successor, Cœnwulf. When Beorhtric died in 802, Ecgberht returned to Wessex, possibly with the support of Charlemagne and the papacy. The Mercians did not approve. On the day of his ascension, the Hwicce (now part of Mercia) attacked. The Hwicce ealdorman, Æthelmund, was met by a force from Wiltshire led by Ecgberht’s brother-in-law Weohstan. The Hwicce were defeated, but both Æthelmund and Weohstan were killed. There is no further record of conflicts between Ecgberht and  Mercia for the next 20 years. 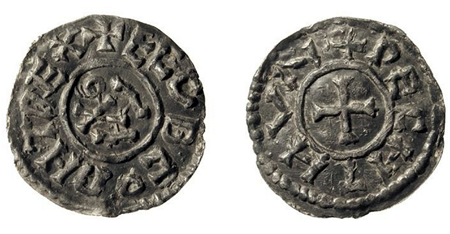 In 825, the Mercian domination of southern England came to an end. Details of the Battle of Ellendun are unknown, but there is reason to believe that Ecgberht attacked Beornwulf, King of Mercia while his armies campaigned in Dumnonia that same year. The Anglo-Saxon chronicle also states that the East Anglians asked for Ecgberht’s protection, but whether that was in 825 or 826 is debated. In 826, Beornwulf invaded East Anglia and was killed. Mercian failures in East Anglia confirmed the power of Wessex.

Four years later, Ecgberht invaded Mercia, driving King Wiglaf into exile. This gained Ecgberht control of the London mint, and earned him the posthumous title bretwalda. In late 829, the Northumbrians submitted to Ecgberht at Dore, following a military campaign. In 830, Ecgberht turned his attentions toward Welsh lands., the same year Mercia rebelled against Wessexian rule. Details of this turn are not known, but in the end Wiglaf regained power in southern England. The change in Ecgberht’s fortunes might be related to an ebbing of Carolingian support due to internal struggles on the continent. Ecgberht’s victories marked the end of independent Kent and Sussex. In 836, Ecgberht was defeated by the Danes at Carhampton. In 838, he fought them again at Hingston Down, Cornwall and was victorious.

Ecgberht died in 839, leaving land to only male heirs to keep estates within the royal family. At the Council of Kingston, Ecgberht granted lands to the sees of Canterbury and Winchester. In exchange he was promised the church’s support for his son’s Æþelwulf’s claim to the throne. Ecgbert was buried at Winchester Cathedral, as was his son Æþelwulf, his grandson Alfred the Great, and his great-grandson Eadweard the Elder.