Æþelbald was King of Mercia from 716 to 757. He was the son of Alweo and grandson of Eowa, brother of Penda. He ascended to the throne following the suspicious death of King Ceolred, who had previously sent him into exile. At the end of his reign, Æþelbald ruled all England south of the Humber, yet was not titled bretwalda by either the Wessexian Chronicle of Historia ecclesiastica gentis Anglorum.

Before his ascension, King Ceolred drove Æþelbald into exile. Æþelbald took refuge in the Fens and there visited Guthlac, a hermit monk who lived in a barrow at Crowland. After Guthlac’s death, Æþelbald claimed to have a prophetic dream that greatness awaited him. Shortly thereafter, King Ceolred died of fits at a banquet table, clearing the way for Æþelbald’s return and ascension.

Æþelbald’s reign marked the beginning of a powerful period for Mercia. Between the reigns of Æþelbald and Offa, the kingdom dominated for eighty years. By 731, all the southern kings bowed to his overlordship. Little evidence survives to support his dominance over Kent, other than his patronage of Kentish churches. It was also during this period that London was attached to Mercia, rather than Essex. The contemporary chronicler Bede, summarized that in 731 all southern England was subject to Æþelbald, King of the Mercians.

There seems to have been a number of conflicts and wars under Æþelbald’s rule. The purposes of these battles can only be surmised. When Cuthred of Wessex succeeded Æþelheard in 740, he “boldly made war against Æþelbald, king of Mercia”. Years later, Cuthred and Æþelbald fought together against the Welsh, a possible obligation placed upon Cuthred for his previous offense. In 752, the two were again on opposing sides of the Welsh conflict, with Cuthred putting “him [Æþelbald] to flight” at Bedford. By the end of his reign, Æþelbald reasserted his claim to Wessex. On a different front, in 740 Æþelbald warred with the Northumbrians and Picts, taking advantage of King Eadberht‘s absence and possibly burning York.

A letter was sent by Wynfryth of Wessex (later St. Boniface) to Æþelbald in 745/746, detailing his many sins against God and the church. Among his offenses were: stealing ecclesiastical revenue, violating church privileges, imposing forced labor on the clergy, and fornicating with nuns. There also exists a 9th century claim, that he murdered the kinsman of a Mercian abbess. Boniface’s letter instructed Æþelbald to abandon lust and take a wife. The letter was sent to Ecgberht, archbishop of York, and delivered and read by Herefrið, a priest close to Æþelbald.

“We therefore, beloved son, beseech Your Grace by Christ the son of God and by His coming and by His kingdom, that if it is true that you are continuing in this vice you will amend your life by penitence, purify yourself, and bear in mind how vile a thing it is through lust to change the image of God created in you into the image and likeness of a vicious demon. Remember that you were made king and ruler over many not by your own merits but by the abounding grace of God, and now you are making yourself by your own lust the slave of an evil spirit.”

In 747, Æþelbald presided over the Synod of Clovesho (location unknown). The synod condemned secular activities among the clergy and limited relations between laymen and monks. At the Synod of Gumley in 749, Æþelbald issued a charter freeing ecclesiastical lands from all obligations except the building of bridges and forts. 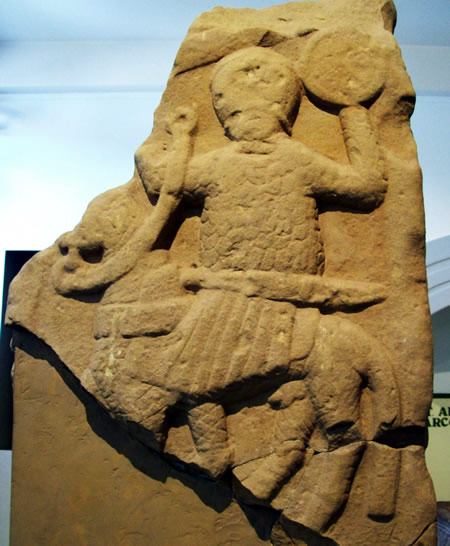 Æþelbald was “treacherously murdered at night by his own bodyguards” at Seckington, Warwickshire in 757. The reason is unknown. He was buried in the crypt of St. Wystan’s Church, Repton, Derbyshire. On a stone cross fragment (i.e., the Repton Stone), now at the Derby Museum, is a relief image of a mounted figure with a diadem. It is thought to be a representation of Æþelbald.