Eadweard the Elder (i.e., Eadweard cyning) reigned in England from 899 to 924. The eponym Elder is a 10th century title used to distinguish him from Eadweard the Martyr. Eadweard was the second ruler to hold the title Anglorum Saxonum rex, the first being his father Alfred the Great. Eadweard’s succession as king was not assured since his male cousins Æþelwold and Æþelhelm, children of Æþelræd had been skipped over by Alfred due to their young age. Upon Alfred’s death, Æþelwold used a small force to seize Wimborne in Dorsetshire. When Eadward moved to Badbury, Æþelwold retreated to the north, seeking support from Danish Northumbria. Æþelwold was crowned King of Jórvík in 901 sailed into Essex with the Danes. The following year they pushed their attack into Mercia. Eadweard and his army ravaged East Anglia, but when his Kentish men disobeyed an order to retire, they were defeated at the Battle of the Holme. Despite the loss, both Æþelwold and Eohric, Danish king of East Anglia, were killed in the battle. This ended Æþelwold’s Revolt. 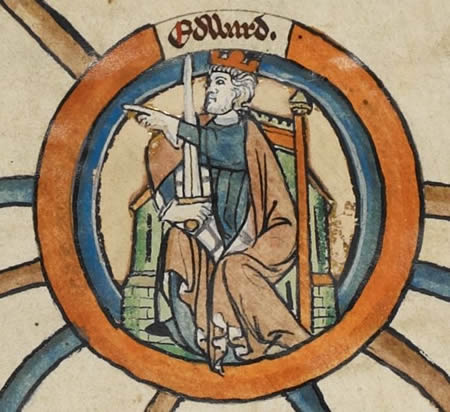 Eadweard regained Chester in 907, but the details of this have been lost. He also harassed Northumbria in 909. Retaliation at the Battle of Tettenhall was met by Mercian and West Saxons, resulting in the destruction of the Northumbrian Danes and a cessation in raids south of the Humber. Eadweard established additional burhs at Bridgnorth, Hertford, Scergeat (location unknown), and Withan. The burhs were constructed with the exact plans used by his father.

During the course of his reign, Eadweard’s kingdom came to encompass Mercia, East Anglia, and Essex. By 918, all Danes south of Northumbria had submitted to Eadweard. By the end of his reign the Scots and Welsh also recognized him as “father and lord”.  Despite his creation of bishoprics within the kingdom, it is not believed that he was religious. In fact, on one occasion Eadweard was reprimanded by the Pope for not paying more attention to his religious “responsibilities”.

Eadweard died in 924 at Farndom-Upon-Dee, leading his army against a Welsh-Mercian rebellion. He was buried at New Minster, Winchester and later moved to Hyde Abbey.